An accurate diagnosis is necessary for an effective treatment. Learn more about the different diagnostic equipment available in Germany here.

A cancer diagnosis is no longer a death sentence for patients in Germany. New medicine and treatment options have improved the prognosis by many types of cancer, the German media reported. 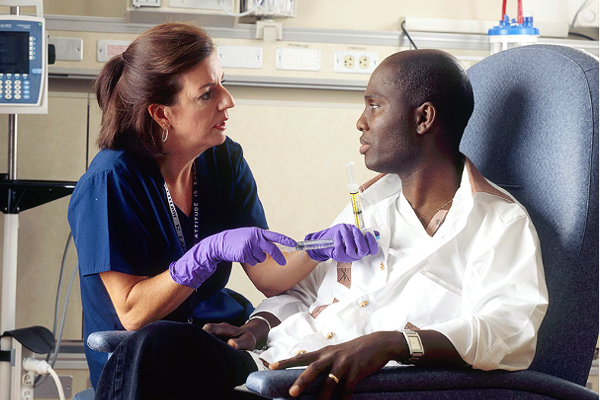 “The biggest breakthrough was in hematological oncology for certain forms of leukemia and lymphoma,” reported Dr. Hermann Brenner of the German Cancer Research Center Heidelberg (DKFZ).

Brenner is Head of Department of Clinical Epidemiology and Gerontology and Acting Leader of the Department of Preventative Oncology at the Cancer Research Center.

Additionally, the survival rates for lip cancer, prostate cancer, and malignant melanoma – a type of skin cancer – have noticeably risen in Germany over the course of ten years. With some of the malignant illnesses, the five-year survival rate improved by more than 20 percent in the past two decades.

Many types of cancer in children are also more easily cured than earlier, Dr. Brenner added.

For other types of cancers which are more difficult to detect or treat, the survival rates have only marginally improved in the past several years. These include pancreatic cancer, lung cancer and esophageal cancer.

Even with breast cancer and colon cancer, thousands survive

Although the increased cancer survival rates are good news, leukemia, lymphoma and metastasized malignant melanoma are all forms of cancer which are relatively rare in comparison to breast cancer and colon cancer.

“But even with more common forms of cancer, the survival rate is increasing,” said Dr. Brenner.

At first glance, this may not seem like a significant increase. However, when the increased instances of cancer diagnoses are taken into account, the numbers mean that thousands of patients’ lives have been saved.

German healthcare has made major advances in this regard with the introduction of the preventative colonoscopy. A carcinoma will in most cases be identified early enough to be successfully treated. If colon cancer is discovered in stage one, the survival rates are at 90 percent. Even better, a preventative colonoscopy can identify cancer precursors, such as polyps, so early that they can’t even develop into cancer, because they are removed immediately during the examination.

Cancer therapy of the future

What does the future look like? Will cancer be curable for all patients in the foreseeable future? Research suggests that this isn’t likely, but in the future, cancer will be seen as less of a deadly illness and more of a chronic illness. With careful monitoring and follow-up treatments at regular intervals, patients can expect to live longer and have a higher quality of life despite a cancer diagnosis.

Two new approaches to cancer treatment in Germany show particular promise. First, personalized oncology which focuses on targeted treatment measures and is highly customized for each patient’s individual case can help doctors adapt treatment plans to better suit patient’s needs. Second, immunotherapy is a promising new branch of cancer research in which the body’s own immune system is activated to fight against the illness and attack cancer cells. Both approaches are in the early stages and are not yet available for all types of cancer, but patients can expect to see more developments in the next several years in both of these fields.

In spite of this good news, the number of new cancer cases in Germany is also increasing. Breast cancer statistics show more than 70,000 new cases per year, and with colon cancer, more than 60,000 diagnoses per year.

“The increase in cancer diagnoses is largely due to demographics,” explained Dr. Brenner. Cancer usually first appears in old age, and in Germany, people are living longer than ever before. Society is aging, and therefore, the number of cancer instances also increases.

Another explanation for the increase is that more instances of prostate cancer are being diagnosed and treated that actually wouldn’t have been treated before due to increased screening. “In this case, to some extent due to over-diagnosis, too many people are becoming patients,” said Dr. Brenner.

Still, not every type of cancer is increasing. The number of cases of colon cancer in Germany is sinking noticeably due to successful early intervention and prevention. Lung cancer rates are also decreasing for men in Germany.

These examples show us how important prevention and early diagnosis are for cancer. Here, the expert sees the biggest opportunity to reduce the number of deaths due to cancer. Policymakers for public health also have a responsibility to reduce cancer, for instance by supporting more strict tobacco prevention measures and further developing prevention programs.